A ceremony to send off 428 soldiers and military police officers joining UN peacekeeping missions in Mali and South Sudan was held yesterday at Pochentong Air Base in Phnom Penh.

All of the soldiers will replace Cambodian blue helmet forces that are wrapping up their missions in those countries, Gen Sovanny noted.

“Now our troops, including 50 women, have been fulfilling their mission with UN peacekeeping forces in five countries: Sudan, South Sudan, Central African Republic, Lebanon and Mali,” he said. 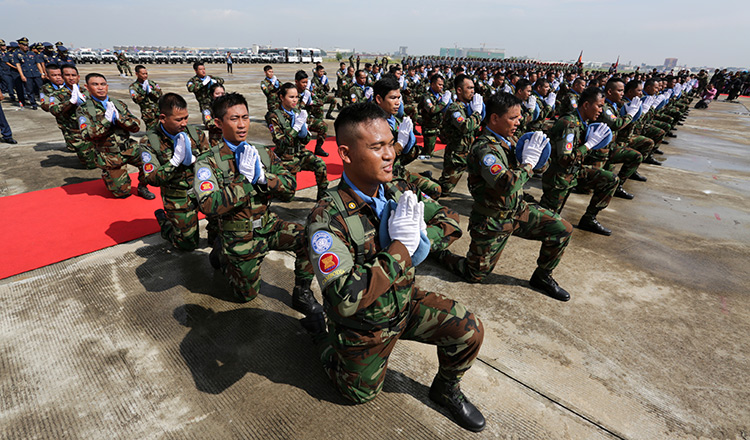 Alexandre Huynh, representative of the UN’s Food and Agriculture Organisation in Cambodia, co-presided over the ceremony yesterday with General Pol Saroeun, commander-in-chief of the Royal Cambodian Armed Forces.

Mr Huynh said that on behalf of the UN, it was his pleasure and honour to join Cambodian forces in bidding farewell to troops before their respective missions in Mali and South Sudan.

“Most importantly, your service does great honour to your country and to Cambodia’s contribution to international peace, security and friendship,” said Mr Huynh.

“Cambodia remains one of the largest providers of peacekeeping personnel in the Asean region,” Mr Huynh added, noting he was heartened to see women among the ranks.

Last year, a Cambodian peacekeeper died from malaria in January, while in May, four Cambodian servicemen were killed in CAR in a night-time attack by the Christian anti-Balaka rebel group in the southeast of the country.

The UN granted $70,000 in compensation to each family of the fallen officers in the attack.

Colonel Leang Sovannara, commander of Explosive Ordnance Disposal unit 132, said soldiers would respect the discipline, morality, law and orders of the UN and would be successful in their mission for Cambodia.

“We also worry a little about our safety, but we are prepared to protect and solve problems when they occur,” he said.