Joe King Carrasco’s shows are all wild, super high-energy and Sonny Inbaraj Krishnan was there when he performed in Oscar’s At the Corner last weekend.

Pop quiz: So why does Joe King Carrasco, the King of Tex-Mex Rock and Roll – who has had interviews in Rolling Stone, performed on Saturday Night Live and MTV, recorded 24 albums, inducted twice into the Austin Music Hall of Fame, with his song ‘Party Weekend’ still known as the quintessential party anthem – want to perform in Cambodia?

Well, Joe King first visited the Kingdom in December and fell in love with the country.

“Everyday is a new discovery – for song ideas and lyrics – I spent December in Cambodia. I wrote a lot in Phnom Penh, Kampot and Siem Reap. I find something special and spiritual about Cambodia and the South China seas,” he tells Joe Wrigley of Leng Pleng.

“I think everyone should see Angkor Wat – so that is our next stop. There is no other place in the universe as spiritual as this magic place!! I will always try to play in Cambodia ‘till I drop!” Joe King goes on to tell Leng Pleng more.

Joe King Carrasco’s shows are all super high-energy and he opens his show in Oscar’s At the Corner last Friday with ‘Baby Let’s Go To Mexico’ and ‘Tengo Muchachita’ from his latest ‘Chiliando’ album, with his current band Los Side FX. ‘Chiliando’ is a Tex-Mex roots rock and blues album, which was produced by the Grammy-nominated Rick Del Castillo.

With Joe King on guitar, Vince Mejia on drums and Chris Alcaraz on bass, the Tex-Mex Rock and Roll King turns Oscar’s into a party house with bodies writhing on the dance floor oozing with sexual vibes and sweat from the sweltering heat on a hot summer night – all primed for a maximum orgasmic bomblast. The night’s young, so what the hell with the senoritas all around – everyone dolled up and ready end up where the night might lead them as the tequila shots take effect.

Joe King’s Tex-Mex rock and roll, cranked sky-high, is a unique fusion of rock and roll, blues, country, and various strains of Latin music, particularly conjunto. According to allmusic.com, Tex-Mex emerged in the ‘60s, when garage rock bands like the Sir Douglas Quintet and vocalists like Freddy Fender began pounding out rock and roll that was spiced with south-of-the-border flourishes.

“During the ‘70s, these conjunto, country, and blues roots became more pronounced and by the ‘80s, Tex-Mex was established as a unique genre of its own that fell between the cracks of rock, country, and Latin music,” writes allmusic.com.

Joe King’s heart is in Latin America and in the 1980s, he studied in Nicaragua and recorded his ‘Bordertown’ and ‘Bandido Rock’ albums. This was a tumultuous period in the country’s history with the raging Contra War which was waged between the FSLN-led government of Nicaragua and the United States-backed Contras from 1981-1990. The revolution marked a significant period in Nicaraguan history and revealed the country as one of the major proxy war battlegrounds of the Cold War with the events in the country rising to international attention.

When he’s not performing, Joe King Carrasco hangs out at his own Nacho Daddy, a downtown cantina in Puerto Vallarta, a resort town on Mexico’s Pacific coast, with its interior decorated with all kinds of memorabilia. There’s also a Nacho Daddy’s gift shop, where you can buy a variety of Joe King Carrasco gear.

The skinny kid in the late 1970s, who wore a cape and a silly crown on stage and jumped down from giant speakers, is now a living Tex-Mex legend. Joe King Carrasco now dons cowboy hats, shades and is soberly dressed but he’s still a one-man fiesta. 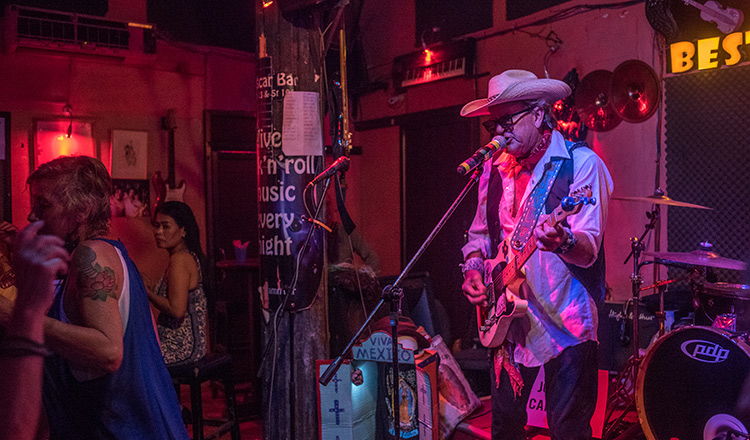 These days, as part of his stage antics, he plays his Fender Telecaster behind his head, circles the room, climbs on chairs and tries to run out into the street, with his manager following a few steps behind with a flashlight as a makeshift spotlight.

This reminds me of a 1992 Buddy Guy concert I covered in Bangkok’s Hard Rock Cafe when the blues guitarist decided to walk from the stage to the street outside in Siam Square, freaking out the organisers and his minders. This was when Buddy Guy gave his classic interview to the media. When asked which present day Blues guitarists he liked, Buddy Guy just laughed and said that he was the only real blues guitarist left, as everybody else was just in it for the money.

With thousands of live performances under his belt and circles of fans around the globe, Joe King Carrasco is no doubt still the King of Tex-Mex Rock and Roll.

Hand in hand into no man’s land