Two more people have been killed by lightning this week as parts of the country continue to be hammered by heavy rains that have caused flooding and extensive damage to crops and homes.

Duk Thiya, police chief of Takeo province’s Tram Kak district, said that on Tuesday evening, lightning struck and killed a 72-year-old woman named Sok Moun while she was sitting under her home in Leay Bo commune.

“There has been heavy rain for a few days which will flood some areas and some people may get killed from lightning,” he said.

Hun Khut, 12, from Rakchey commune in Prey Veng province’s Ba Phnom district, was also struck and killed by lightning during a storm on Tuesday evening, according to the Ba Phnom district administration. 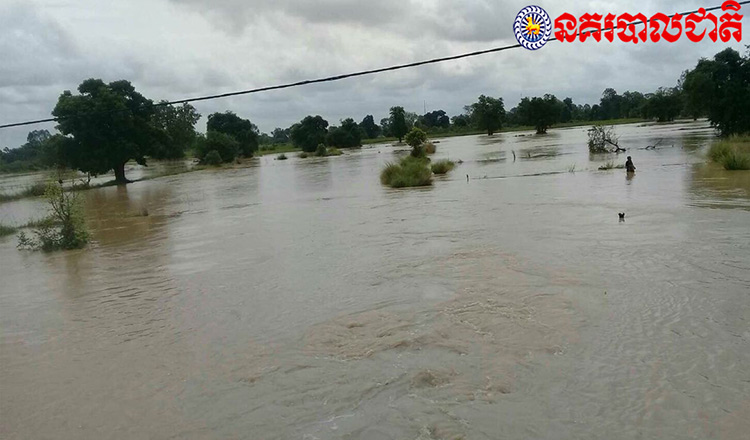 The two deaths bring the total number of people killed by lightning this year alone to 19, based on figures released by the spokesman for the National Committee for Disaster Management last week.

Last week, two people were killed while another two were injured by lightning strikes in Strung Treng and Battambang provinces, just days after authorities warned the public to mind incoming storms.

Last weekend, one person died and three others were injured in Svay Rieng province and dozens of homes were damaged by storms in Pailin, Banteay Meanchey, Svay Rieng and Battambang provinces.

The Ministry of Water Resources and Meteorology announced yesterday that the rainy season will officially arrive on Saturday, bringing rain throughout the country and floods to some areas.

“New rain and possible floods will come again from May 2 to May 11. Please be aware of big storms and lightning which can destroy houses and crops and also kill people,” the statement said.

Deib Chhoun, governor of Thma Puok district, said that rainstorms have hit Banteay Meanchey province hard for almost one week and have flooded some areas, affecting the dam on Tuesday evening.

“Now the authority is repairing the damaged section of the dam after it suffered from flooding. The rain is still coming down,” he said.

The Health Ministry’s communicable disease control department on Tuesday released instructions for people on how to take care of their health during the coming rainy season.

The CDC announced that some diseases such as dengue fever, malaria and the flu often arose during the rainy season, adding that symptoms of disease such as diarrhoea and fever were also quite common.

“People must take care of their health during the rainy season to avoid any diseases by taking a bath after getting rained on, wash hands thoroughly, maintain a clean environment around the house and live with proper hygiene,” it said.