TO give interested young Cambodians concrete ideas on how to apply for scholarships in Japan, the Embassy of Japan and the Japan Alumni of Cambodia conducted a seminar on the MEXT Scholarship last week.

MEXT is considered as the largest scholarship programme in Japan provided by the Ministry of Education, Culture, Sports, Science and Technology of Japan for Cambodian students.

Yumi Suzuki, first secretary of the Embassy of Japan, said that the Japanese government has been providing scholarships for Cambodians since 1992, and it has brought more than 1100 students in Japan to pursue their studies.

Scholarship advisor, Ly Hokchhay, presented to students the procedures and requirements for the scholarship programme.

Mr Suzuki added that there have been significant changes in the requirements and documents needed to be complied by applicants. 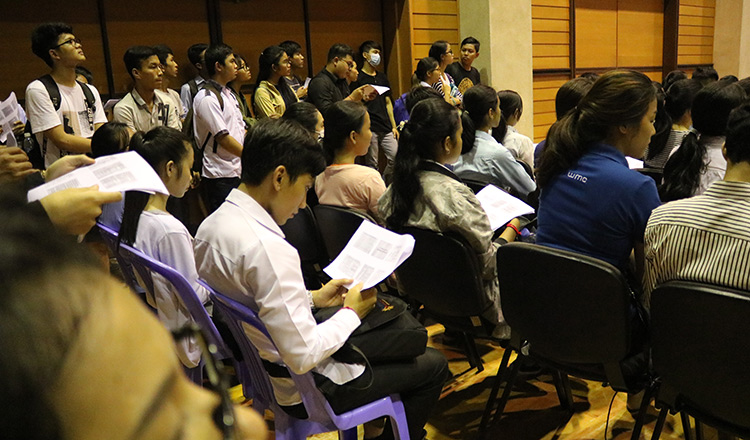 The scholarships provided by the Japanese government to Cambodians have been seen as a great contributor to the development of the Kingdom, as well as the bilateral relationship between the two nations.

And with the direct flights between Japan and Cambodia since 2016, tourism has also boomed. Both countries are expecting more exchanges and investments that will give rise to more developments.

Students who will get slots in the scholarship are considered future pivotal players as they will soon contribute as valuable human resources for public and private organisations in Cambodia, as well as in Japan.

Last week’s seminar also featured four students who were granted Japan-funded scholarships. They were able to share their experiences to students who are eager to follow their footsteps and get good education in Japan.

“I sincerely hope that upon hearing the success stories, more and more Cambodian students will be persuaded to apply for our scholarship programme,” Mr Suzuki said.

The Fine Art of Small Talk