The Khmer National United Party will hand over its presidency to its former president Nhek Bun Chhay who was released on bail on Monday in a bid to contest the election in July, an official said yesterday.

Soeung Kiry, current KNUP president, said that he and ten other KNUP officials visited Mr Bun Chhay at his home in Phnom Penh’s Chroy Changva district yesterday morning after he was released on bail Monday night, asking him to take the helm.

“When I was meeting him, I told him that I want to hand over the party presidency to him, but he told me that he did not want to accept it yet because of his health,” Mr Kiry said. “He asked me to continue to lead the party.”

“When his health is fine, we will hold a congress to hand over the position of the party president to him,” said Mr Kiry.

Mr Kiry said that KNUP will field Mr Bun Chhay as a lawmaker candidate for Banteay Meanchey province where he was born and that the party will submit its candidate list to the National Election Committee for registration on Friday or Saturday. Phnom Penh Municipal Court on Monday released Mr Bun Chhay on bail under court supervision after he was jailed in August over a 2007 drug production case in Kampong Speu province.

Y Rin, spokesman for the court, said the court released Mr Bun Chhay on bail to follow his lawyer’s request, but he remained under the court’s supervision.

Yoeun Thanrath, administration chief of Phnom Penh’s PJ Prison, said that Mr Bun Chhay was slated to be freed yesterday morning, but because of his illness he was released on Monday night.

“He left the prison at 7pm on Monday,” Mr Thanrath said. “We released him based on the court’s order.”

“The court released him on bail because he is very sick, with high blood pressure and diabetes and his wife also has lung cancer, so that is the reason why the court allowed bail – for them to take care of each other,” Mr Vandeth said.

General Khieu Sopheak, spokesman for the Interior Ministry, said that if the court released Mr Bun Chhay on bail without conditions, he still had rights to become party president.

“If he does not have a final verdict to prove that he is guilty, then he still has the rights to join politics,” Gen Sopheak said.

Mr Bun Chhay was deputy commander in chief of the country’s military when Funcinpec shared power with the CPP during the 1990s. 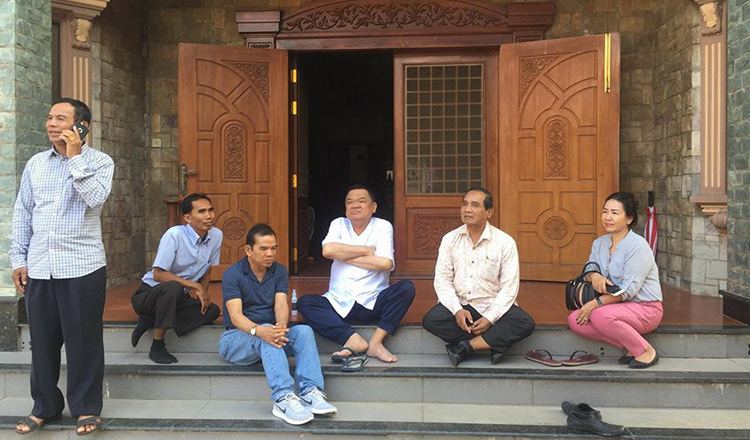 In 2016, Mr Bun Chhay left Funcinpec to launch the KNUP, which became the only party outside of the CPP and CNRP to win a commune chief post in Banteay Meanchey province’s Thma Puok commune in the June 4, 2017 commune election.

In June 2017, Mr Bun Chhay was stripped of his role as a government adviser following rumours he was working with the opposition CNRP and more than ten party officials were also removed from the positions within the government.

Mr Bun Chhay was then placed in pretrial detention in August over the drug production accusations after his former personal adviser, Chea Chung, who was already convicted over the 2007 case, fingered him as the ringleader.

Mr Bun Chhay could not be reached for comment yesterday.