Ben Davis, an American national from Oregon, and his wife, Sharyn Davis, an Australian national, have been living in Cambodia since the early 1990s. With the support of villagers, the environmental activists established a community forest (CF) in Preah Vihear province’s Rovieng district which eventually became part of the Phnom Tnout Wildlife Sanctuary. But the villagers have recently turned on them, collecting thumbprints for their eviction, because they have been blocking their illegal forestry activities. Mr Davis talked to reporter May Titthara about the developing situation.

Q: When did you build your house in Phnom Tnout?

A: We started gathering community support in 2012 and when we felt we had full support we moved our house there in 2014. We chose this area because it has a high concentration of wildlife, and is somewhat close to Siem Reap where most tourists come from. The Forestry Administration also was very supportive and demarked approximately 6,500 hectares for the unusually large CF with the understanding that it would be protected as a wildlife area.

Q: Did your community forest get a licence from the government?

A: The community forest was approved in July 2017. We have an MoU with the Ministry of Environment to do ecotourism here which is valid until 2022. Thus we have a mixed team of community members and MoE rangers who do patrolling.

Q: What is the benefit to the forest and its wildlife with your family being there and what will happen if you leave?

A: We are working here to protect the native populations of wildlife. We have counted about six endangered species of wildlife here, such as gibbons, langurs, pangolins, dole, and peafowl. Banteng are probably the most important species and the one we are focusing on protecting the most. Sad to say, while there were a lot of animals outside of our area when we started, most have been eliminated because of the high presence of homemade guns that arrived in 2015. Outside of our CF area, primates have probably fared the worst with almost none of them left outside of Phnom Tnout, except for Phnom Tbeng. So, I think it’s safe to say if we weren’t living in the jungle here it would be the same story at Phnom Tnout. As far as the forest goes, I doubt there would be many if any big trees left, nor would forest with agriculture-suitable soil be left.

Q: What do you think about the villagers collecting thumbprints to evict your family?

A: Obviously I am a little bit taken back since it was only five years ago that this same group of villagers thumb-printed a similar document for me to take to the Forestry Administration requesting to protect this forest under community forest status. At that time the area was under threat of becoming an economic land concession. In my previous work with an NGO I had been involved in helping establish CFs and I was keen that this one not be established simply as a way for villagers to more easily clear the forest and sell the land. So I spent almost a year holding meetings with the community making it clear and getting a commitment from them that this CF would be established primarily to protect the wildlife and benefits would come primarily from ecotourism and non-timber forest products, not hunting and logging. Of course, after 26 years in Cambodia, I was under no illusions that protecting the forest would be easy, but still I have to wonder how they changed their minds so quickly.

Q: Do you know why those villagers are attacking your family?

A: If we look at the history around here, it was only three years ago that this same community protested a nearby ELC and managed to get that company to concede nearly as much land as we are protecting in the CF here. Only three years on, all that land has now been claimed and much of it cleared and some sold to people from other provinces, so the villagers are looking for new areas to exploit. Phnom Tnout is the closest and most logical place to go next, and I doubt it will be the last. Keep in mind our community here that is protesting is only 300 families so they are by no means short of farmland. I hate to say it, but the key driver of all this destruction is debt to microfinance institutions. Most people in our community owe at least $1,000 to $3,000, and agriculture commodities being the prices they are, families see no way of paying back their loans other than logging, clearing and selling forestland which brings income fast. 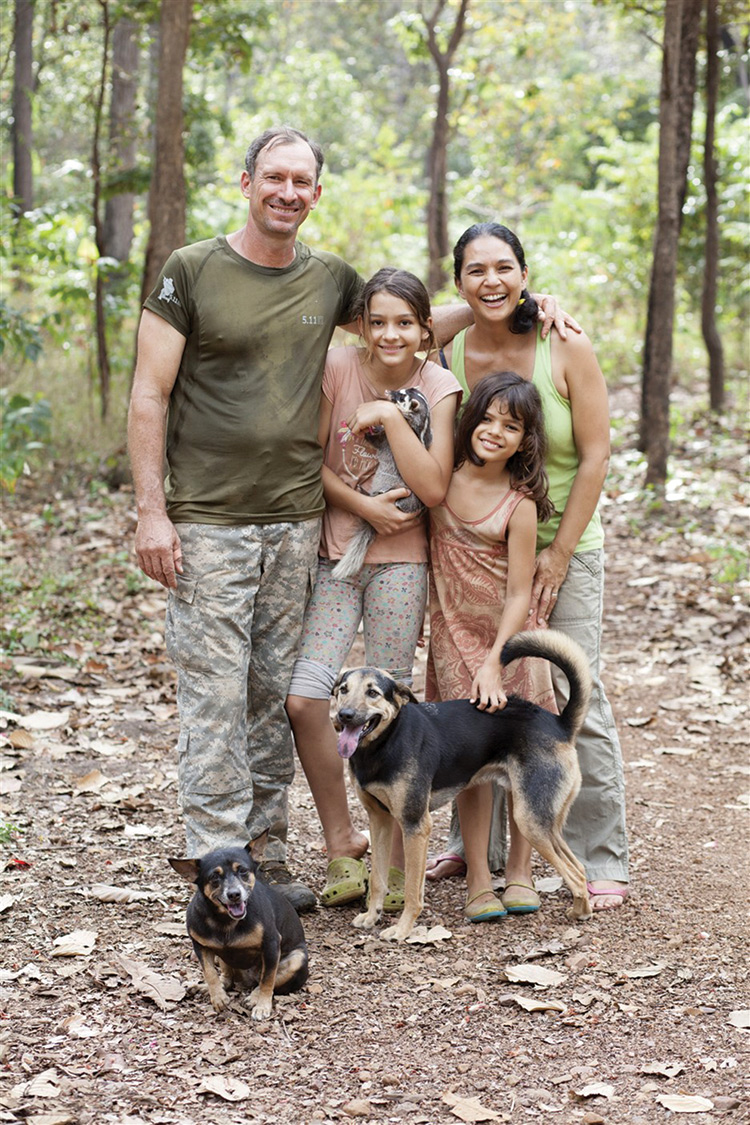 Q: Do you think their push for your eviction will be successful?

A: No. I don’t think there is enough support behind this request nor are the reasons valid, especially from a legal perspective. Most of the people who are pushing this have had some issue with our work; either they have been caught logging or poaching, or clearing forests to make new fields. And they seem to be requesting our eviction because they are being stopped from doing illegal activities in the forest. About 50 percent of the villagers have no problem with us being here, but it is the vocal people who have had a problem in the past who are making the problem for us now. The others who don’t have any problem maybe don’t care quite enough to openly support what we are doing, so they are staying quiet. At the same time, we do need the support of the villagers to do what we are doing so it makes us sad that we haven’t been successful in gaining local support here to protect what is theirs for the future.

Q: Are you scared for your family’s security?

A: We are concerned to say the least. We are trying hard to monitor the situation at all times so we can make informed decisions. At the moment, I feel that we can continue to operate as normal but things can change rapidly if something sets people off. We are working with the MoE to increase ranger presence here and let them take the lead in law enforcement which should help with our security.

Q: What about the community who lives nearby, how does it benefit from your project?

A: For the communities, there are several ways they benefit. Besides the fact that some of them have employment as guides and community rangers, there are a number of non-timber forest products that the wider community regularly get here such as resin, mushrooms and honey. Depending on the year these resources can be worth many tens of thousands of dollars. For example, so far this year we personally have purchased 350 litres of honey from villagers for $6,125. On a good year, the mushroom crop can fetch thousands of dollars a day and the season can run for over a month. None of these NTFPs would be available if the area was turned into agriculture land. As far as proceeds from ecotourism go, we pass on $15 per foreigner and $5 per Khmer that visit us to the village for development. Since we opened in 2016 that has amounted to over $6,600 and has been used mostly for fixing roads. Sadly, hunting is also another way locals benefit from the forest, which we would like to get away from. For example, my workers counted six deer for sale this morning in the village from hunters who snuck in last night. And that’s just one village in our area.

Q: How long have you been in Cambodia? And why did you decide to live in Preah Vihear? What is your next step?

A: I have worked in Cambodia since 1992 and Sharyn since 1997. We started work here in Preah Vihear in 2002 working in a neighbouring district doing rural development. We have always loved working with rural communities on the periphery which is why we chose this province. We decided to switch from rural development to conservation to meet what we saw as an urgent need that had far less attention. I still think we made the right choice although I can’t say for now what the next step will be. I think if we can somehow get the communities to start thinking long term, they will get on board with us and in the future they will be proud of their forest. We still have this hope.