The family of late environmental activist Chut Wutty and NGOs yesterday called on the government and authorities to seek justice in the case on the sixth anniversary of his killing which took place in Koh Kong province in 2012.

Mr Wutty’s son, Cheuy Oudom Reaksmey, said yesterday that he and his family, as well as civil society groups monitoring the case, found the report into his father’s murder unacceptable.

“I still demand that the government seek justice and arrest the perpetrator responsible for murdering my father. My family and I still do not recognise the report issued by Koh Kong Provincial Court, which was disseminated by the government. We demand to seek justice again,” he said.

“I am in the United States and will hold a religious ceremony to mark the anniversary for my father at a pagoda in California with Cambodian people living in the community. I have chosen to hold it on April 29.”

Yesterday, about 50 members of the Cambodian Youth Network invited monks to perform a religious ceremony for Mr Wutty at the CYN office in Phnom Penh’s Tuol Kork district.

In the ceremony, participants were quiet for 30 seconds to honour and commemorate Mr Wutty, who sacrificed his life for the protection of forests and natural resources.

Tim Malay, director of the CYN, said that the ceremony was held to remind all youths that the right to freedom of assembly and justice for victims in the cause of protecting forests and the environment was diminishing.

He said that on the fifth anniversary of Mr Wutty’s death, a public programme organised by CYN and other organisations to honour Mr Wutty was prevented by police.

“The obstruction of authorities in the past has shown a disregard for justice advocates like Chut Wutty,” he said.

Mr Wutty was shot to death in Kok Kong province on April 26, 2012 in Mondol Seima district’s Bak Khlang commune when he led two local journalists to collect information and took pictures of illegal logging activities in the Cardamom Mountains. 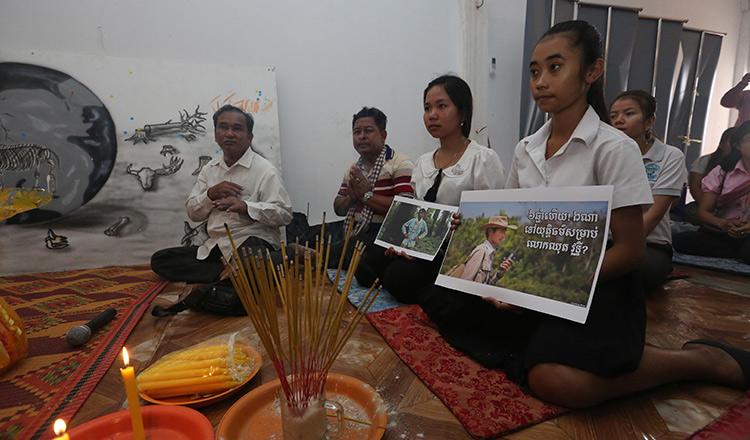 He was shot by company defence forces while attempting to take pictures of the logging by a private company, which had been prohibited.

On May 5, 2013, the government’s joint investigative committee announced after a five-day investigation that Mr Wutty was shot dead by Mr Rattana, who was accidentally shot when Mr Boroth tried to take the gun away from him.

The findings caused controversy and the provincial court did not take any action in the case, claiming that there was no one to prosecute since Mr Rattana, who shot Mr Wutty, also died.

Mr Boroth was charged with unintentional murder and sentenced to two years in prison, but 18 months of the sentence were suspended.

San Mala, environmental activist and founder of the NGO Mother Nature, said that deforestation and the destruction of wildlife and other natural resources in Cambodia occurred because authorities did not abide by the laws.

He added that activists working to protect the environment and natural resources have always been threatened and were often unfairly detained by authorities when they tried to investigate and reveal corruption.

“We see that the government does not seem to pay attention or protect environmental activists, contrary to the call for participation in forestry and natural resources protection by the government,” Mr Mala said.

“On the contrary, those who are involved in natural resources protection are often imprisoned, threatened and shot dead. While traders and corrupt people who steal the nation’s property, we don’t see anyone coming to take them to court.”

Phay Siphan, spokesman for the Council of Ministers, said that the appeal by the groups related to the murder of Mr Wutty was their right, but it would not have any legal effect.

“The decision of the court, no one can infringe upon this decision,” he said.

Foreigners given more time to get work permits