Garment worker Sauth Sokha is hard at work inside her factory along Veng Sreng Boulevard in Phnom Penh, but the 25-year-old is not sewing any clothes.

Ms Sokha, from Kampong Thom province, is reading a food recipe book while on break inside the factory’s library.

“For me, I like to read food recipe books because I want to become a chef in the future,” Ms Sokha says. “I go to the library about two or three times a week and always borrow books to read at home because I have free time at night.”

Ms Sokha’s employer, the Jie Wei (Cambodia) Garment Factory, is just one of about 18 factories that have joined the Sipar association’s initiative to build libraries within their factory.

Sipar, a French NGO focused on reducing the country’s illiteracy rate, began the push for libraries within factories in 2013, when it opened its first library within a British-owned factory in Phnom Penh.

Hok Sothik, director of Sipar, says his association has cooperated closely with the Garment Manufacturers Association in Cambodia and the Labour Ministry over the past few years to expand the programme to about 18 factories.

“This plan began five years ago and now about 18 factories have created a library,” Mr Sothik says. “The plan has been successful because a lot of garment workers support and are interested in it.”

Mr Sothik says quite a few garment workers remain uneducated, even illiterate, and that the library programme is aimed at lifting their knowledge and capacity.

“We plan to create 16 more libraries at factories on the outskirts of Phnom Penh and in some provinces,” he says. “According to my estimate, about one-third of workers in any given factory like to visit the library.”

The Cambodia Socio-Economic Survey 2015 shows that the adult literacy rate increased to 80.5 percent from 78.1 percent in 2014, according to the survey’s author, the National Institute of Statistics with the Ministry of Planning.

Ms Sokha says she has been trying to encourage her co-workers to also visit the library and get into the habit of reading.

“I think that creating libraries inside the factories is a good idea because most garment workers do not have much time to go read books at the public library like students,” Ms Sokha says. “Reading books allows us to gain more knowledge and understand society.”

Next to Ms Sokha, library manager Ly Chandara, who is organising books, notes that the library began construction in September 2015 and opened to workers in January 2016.

Mr Chandara, 35, says most workers borrow books from the library to read at their home, with a small number reading within the library, because they do not have much spare time while at work.

“There are about 110 to 120 workers who read books in the library every month,” says Mr Chandara, adding that the factory employs about 1,000 workers.

“They support having the library in the factory because they can take books home, or read on their lunch break.”

Mr Chandara stacks a few books into different piles and says that the library has three types of books thus far, including educational books that focus on history, philosophy and geography, literature like novels and storytales, and also magazines.

“I think that reading books is very important because it can provide a lot of knowledge and experience,” says Mr Chandara.

Diep Sophoeun, 32, another worker at the factory, says he tries to read a book in the library every day.

“I like to read books written by famous writers because their writing is very good and we can learn from them,” he says. “I support the library because it can help garment workers who are from the provinces have an opportunity to study.”

Ms Chenda, who dropped out of high school, says the library allows her to continue her studies while also maintaining her job to earn an income to share with her relatives.

“I stopped my studying while in Grade 10,” Ms Chenda says. “I think that when I read books, I will get more knowledge.”

“I like storytales,” Ms Chenda says. “I wish more of my co-workers would make use of the library because it can help them learn.”

Raymond Tam, owner of the Jie Wei factory, says he hails from Hong Kong and immediately supported Sipar’s library programme because he wanted to help his uneducated workers.

“I think that everything starts from education,” Mr Tam says. “Most of the workers from the provinces never went to school, or never finished school at a high level, so they are welcome to come to the library and take out what they need.”

“We encourage the workers to go to the library to read more books,” he adds. 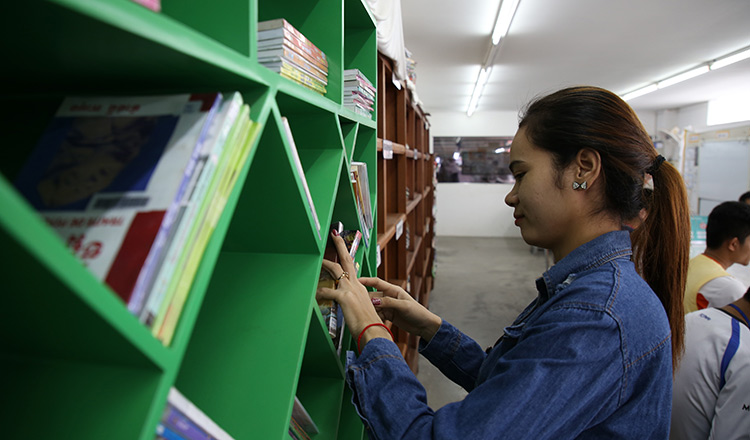 Mr Tam says the library opens from 11am to 12pm during the week for workers to stop by on their lunch break and is also open from 4pm to 6pm on Saturdays.

Lay Sok Heng, an officer with GMAC, says that GMAC has been cooperating with Sipar to expand the library programme to more factories by encouraging its members to adopt the initiative.

Mr Sok Heng adds that the Labour Ministry has also been a key partner in convincing owners of factories to support the plan.

“I think that creating libraries in factories is a very good idea that provides education to garment workers,” Mr Sok Heng says.