The Transport Ministry has issued a statement calling for people to pay attention to oncoming trains on the Poipet-Battambang railway after three accidents occurred on the line since its launch earlier this month.

The ministry said that people need to respect the train’s right of way by keeping at least 3.5 metres away from the track while a train is oncoming.

Neither the ministry spokesman nor the CEO of the Royal Railway could be reached for comment yesterday.

John Guiry, CEO of the Royal Railway, said during an interview on Monday that he wished to see more participation from the media to disseminate information about the train line and appealed to people to always be careful when crossing the track because the train will always have the right of way. 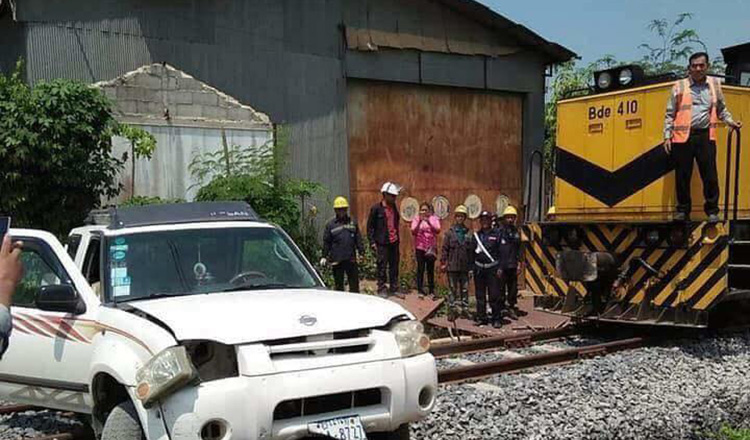 Earlier this week, a lorry was hit by an oncoming train, leaving the driver injured and marking the third accident since the railway became operational earlier this month.

Kim Sovann, head of the Banteay Meanchey department of transportation, said that his unit has donated ten walkie-talkies to facilitate communication between track operators in an effort to reduce the rate of accidents.

“We volunteered to help with by providing ten walkie-talkies,” he said. “Leadership ordered to buy 21 more tomorrow and they will be distributed to operators in districts like Monkul Borey, Thmor Koul.”

“There are 63 roads that must be covered with the cooperation between villagers and commune security,” he added.

Mr Sovann blamed the accidents on people who “did not respect the law”.

“They are not familiar with the presence of trains because it only just started,” he added.

The trainline going from Poipet city to Serey Sophon town started operating on April 4. Starting next month, the same railway will connect Serey Sophon to Battambang.