The Court of Appeal yesterday finished hearing the case of 11 former activists and officials of the opposition CNRP who were convicted of insurrection for their involvement in a protest to demand access to Freedom Park following the disputed 2013 election.

Meach Sovannara, former information department head of the now-dissolved CNRP, and ten activists were found guilty of leading and participating in an insurrection after a violent clash between party supporters and Daun Penh district security guards at Freedom Park on July 15, 2014.

Mr Sovannara was charged and convicted of incitement in July 2015. The Cambodian-US citizen was sentenced to 20 years in prison.

Phnom Penh Municipal Court sentenced the ten others to between seven and 20 years in jail.

The 11 defendants, who have been behind bars for about three years, claimed they were not guilty and asked the court to drop all charges.

“I am imprisoned as a political hostage because it is a political issue,” Mr Sovannara said, asking the judges to drop the insurrection charge.

Nget Sarath, prosecutor of the Appeal Court, asked the court to uphold the verdict of Phnom Penh Municipal Court, saying it had made the correct decision.

“We have noticed a legitimate attempt to liberate Freedom Park was made by the organisation [CNRP]” Mr Sarath said. 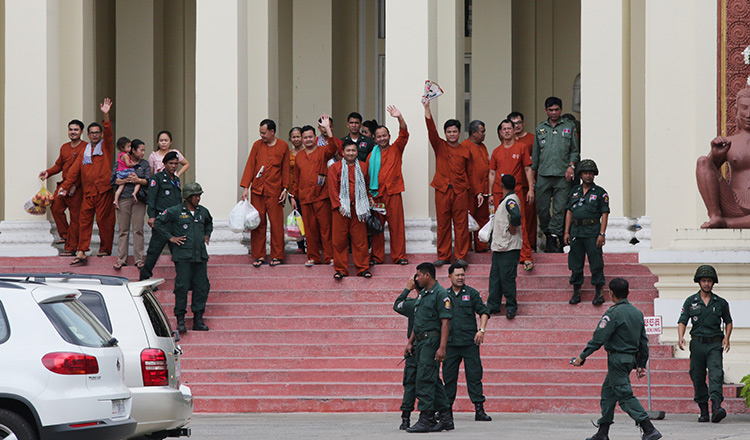 “Those people were present at the scene to provoke an insurrection and impact state institutions. If it was not immediately prevented, it would have stoked the people’s anger and led to a colour revolution.”

Mr Sarath said the government had temporarily closed Freedom Park so people had no right to liberate or encroach on the park.

Defence lawyer Chuong Choungy yesterday concluded by saying that his clients had committed neither violence nor an insurrection, but admitted there was violence on July 15, 2014 near Freedom Park.

Mr Choungy defined an insurrection as a movement that consisted of collective violence liable to endanger the institutions of Cambodia or violate the integrity of national territory.

“There is no insurrection element in this case because Freedom Park is a state institution and no land was lost, which would have impacted national territory,” Mr Choungy said. “There was violence that caused security guards to get injured but my clients did not commit the offence.”

Mr Choungy added that the guards first provoked the violence when they tried to remove a banner from razor wire.

“Where is the proof in the video clips showing that my clients committed an offence? There is none,” he said, referring to video played during the trial.

Ly Chantola, a lawyer for the 39 plaintiffs, agreed with the prosecutor’s conclusion that the insurrection on July 15, 2014 could have led to a colour revolution if they had succeeded in accessing Freedom Park.

“There was collective violence and they incited the people’s anger to beat the security guards wearing blue uniforms,” Mr Chantola said.

Mr Chantola added they had preplanned the activity as Mu Sochua had sent an email to other lawmakers on July 11, 2014 regarding the liberation of Freedom Park.

Judge Plang Samnang said the court would announce a verdict on May 10.