Two provincial governors are due to be replaced this week after Prime Minister Hun Sen said that inactive officials will be excluded from the new government following July’s national election because they failed to seek solutions and gave him a headache.

Speaking during the inauguration of a resort on Preah Sihanouk province’s Koh Rong island on Monday, Mr Hun Sen said inactive officials and those who failed to seek solutions for the people would not be allowed to work in the new government.

“They are very clever. They’ve never thrown hot potatoes to me. If they throw hot potatoes, I can eat them, but they always throw hot stones to me to hold,” he said.

“Now I am not stupid. If they throw hot stones to me to hold, I will throw them back to them. I will wait to see whether they can do it,” he added, referring to government officials who did not seek solutions to problems and passed them onto him.

Mr Hun Sen did not address who the officials were.

“If everything always relies solely on the Prime Minister’s orders, why do we need ministries and institutions? Why do you work as minister or provincial governor?” he asked.

Mr Hun Sen said he usually advised all government officials to carry out their jobs as stated by the law without waiting for his orders.

“There is not a long time before the election. I will wait and see their activities whether they do it or not. If they don’t, a new government will exclude those inactive officials,” he said. “It is my right to prepare government officials to ease the Prime Minister’s headache.” 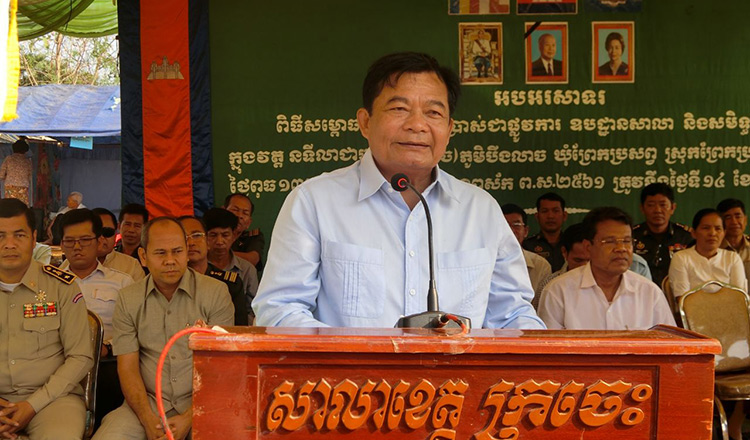 Mr Chamrong said yesterday that he had reached the age of retirement.

“I have now reached the age of retirement. I must follow government’s decision,” he said.

“Now I am at retirement age. I don’t know if the government has a new position for me,” he said.

Phay Siphan, spokesman for the Council of Ministers, said Mr Hun Sen wanted all officials to work harder to gain the people’s trust.

Chhan Chansopheak, spokesman for the Interior Ministry’s General Department of Administration, denied the two governors were being replaced because they could not solve problems.

When asked if Mr Chamrong’s replacement was related to unsolved land disputes in Kratie, Mr Chansopheak said: “No. They do not have any problems. They have just reached the age of retirement.”

About 200 villagers last month clashed with police in Kratie province’s Snuol district over a land dispute with the Memot Rubber Plantation.