Camcontrol and Meanchey district officials shut down a condiment factory in Phnom Penh yesterday after an ultimatum given to the owner to vacate the premises and move to a different location was not heeded following pollution complaints.

Last year, authorities inspected the factory after they received complaints of pollution from residents living in the area and gave the owner a 60-day notice in December to cease operations, vacate the premise and relocate to another area.

“We examined the facility and found that the products made weren’t according to standards. The products were not hygienic and the fumes affected the health of residents while their rubbish clogged sewage pipes,” he said of the inspection last year.

Mr Rath Khemrun said authorities returned to the factory yesterday and shut it down, giving the owner until Friday to move from the area to a new location or face legal action.

In December, authorities discovered that the production of condiments in the area negatively affected the lives of nearby residents.

Residents said that the smell of pollution was unbearable, and that burning debris would often blow into their homes, adding that factory operations caused noise pollution at night and roadside parking caused congestion. 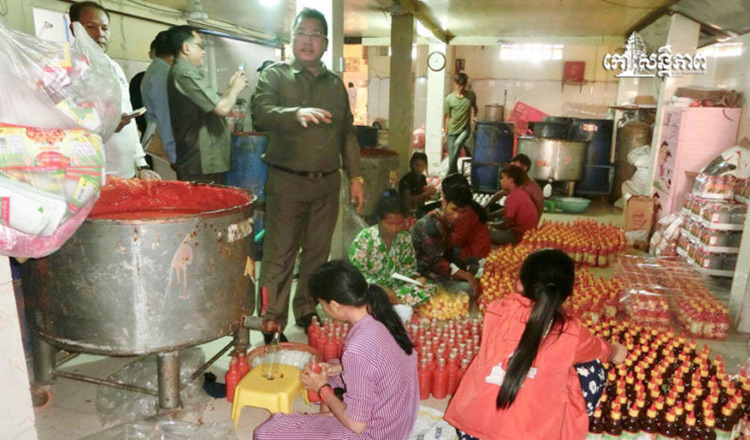 Mr Rath Khemrun said the owner has agreed to close down production and move to a new location in Dangkor district by Friday.

Chhour Chantan, a resident living in the area, applauded the effectiveness of authorities in taking action against the facility that he said “harmed the health of people”.

“It is a good move that the authority thinks about the health of the people like that,” he said.

Mr Ratha could not be reached for a comment.