The agreement was signed on Tuesday between the local businessman and Zhou Xiao Xi, managing director of the Chinese company.

In attendance during the signing ceremony were Cambodian Deputy Prime Minister Men Sam An and the governor of China’s Guangxi Autonomous Region, Chen Wu, who is in Phnom Penh leading a business delegation.

Mr Zhou said with Cambodia’s fast-developing economy, there is urgent need to improve the country’s infrastructure, adding that a new port is badly needed.

“A deep-sea port in Kampot will contribute to the development of society and the national economy and connect the kingdom to the rest of the world,” he said.

“We decided to go ahead with the project after realising that Cambodia currently lacks much-needed investment in deep-sea ports.”

But, a project of such magnitude cannot be undertaken alone, Mr Zhou explained, adding that having a local partner was essential. 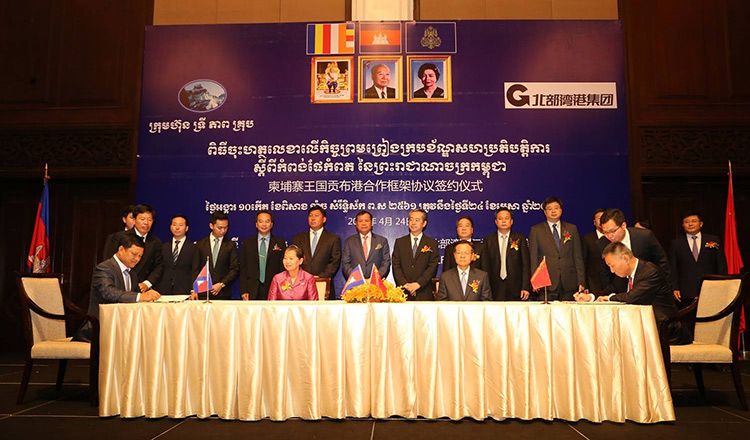 According to the official press release, the new port will be able to handle large vessels, including ships that can carry up to 30,000 tonnes of cargo.

During phase one of the project, the companies expect to create 500 new jobs, generating an additional 1,500 over the next three years.

After the signing ceremony, representatives of the company met with Prime Minister Hun Sen at Phnom Penh’s Peace Palace. During the meeting, Mr Chen said the relationship between Cambodia and China continues to improve, paving the way for more Chinese investors to turn their attention to the kingdom.

“There has been many recent investments in media, agriculture and tourism. They are in line with Prime Minister Hun Sen’s and President Xi Jinping’s commitment to strengthen investment.”

“If only 0.2 percent of people in Guangxi were to visit Cambodia, it would amount to 100,000 new tourists. Our project will help us get there,” said Mr Chen.

Prime Minister Hun Sen said the relation between the two nations is at an all-time high, adding that the new port will be an important element of China’s Belt and Road Initiative.

Cambodian exports to China rose sharply during the first 11 months of 2017, by as much as 18 percent compared to the same period in 2016.