Prime Minister Hun Sen yesterday ordered the Minister of Land Management to check on and handle more than 580 land plots for citizens properly to end a land dispute on Koh Rong in Preah Sihanouk province.

Meanwhile, Koh Rong commune authorities yesterday prohibited some people who have not yet received land titles from participating in an event the premier was attending on the island.

The government has already handed out more than 637 land plots equivalent to 525.37 hectares to 294 families that live permanently on the island.

Mr Hun Sen said the remaining 584 land plots had not been resolved yet because some land plots were in dispute since some residents did not live on Koh Rong, but conspired with each other to grab land on the island.

“I would like to ask for a suitable solution to settle the dispute for people on the island. It has to be minimised, do not let the people wait,” he said. 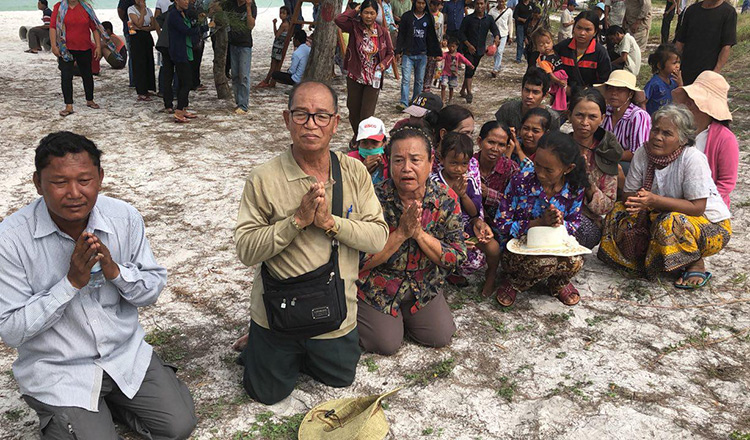 “Land Management Minister Chea Sophara has to check on the 584 land plots,” added Mr Hun Sen. “Those in the minority we cannot find a resolution, we have to find other land to give them. It’s a win-win solution for our people to live on the island.”

Mr Hun Sen said the identity of residents needed to be checked thoroughly to see whether they actually lived on Koh Rong or had come to grab the land.

“The ministry is constantly reviewing the case,” he said.

As Mr Hun Sen was presiding over the resort’s inauguration, about 50 people from Koh Rong commune who have not yet received land titles tried to join the event in order to ask for intervention directly from the premier, but they were prohibited from doing so by Koh Rong and Koh Rong Sanloem commune authorities.

The people’s petition, which contained 87 thumbprints, requested recognition and the provision of land titles and farm land.

Seng Hour Leang, chief of Koh Rong commune, confirmed that authorities did not allow them to attend the inauguration because the location was too small.

“The location where the event was held is small and there wasn’t enough space for all citizens to participate,” he said. “Another thing is that Prime Minister Hun Sen announced and resolved from the beginning, so the people must stay calm and wait for the next solution.”