Price of real estate up after CNRP dissolved: Hun Sen

Prime Minister Hun Sen yesterday said the economic situation of the country looks promising after the dissolution of the opposition CNRP and as the national election nears in July.

“Based on what happened before prior elections, the price of real state, houses, and land did not go up because they were waiting to see how the situation unfolded after the elections,” he said. “But this year, since the CNRP was dissolved, the price of land has begun to go up and everything is stable and people say that the situation is better after the CNRP disappeared.”

“So, the people used to vote for them and they have seen that when they [the CNRP] existed, the situation seemed very gloomy,” the premier added while speaking to trade and union officials on Koh Pich.

The CNRP was dissolved by the Supreme Court in November after its leader Kem Sokha was jailed on treason charges for allegedly conspiring with the US to topple the government through a colour revolution. Its 118 senior members were banned from politics for five years.

Former CNRP lawmaker Ou Chanrath disagreed with the premier, saying that people are still waiting to see political stability following the dissolution of the CNRP.

“We see some buildings are in limbo and some big land is difficult to sell because they are still pondering and they do not yet believe we have political stability,” Mr Chanrath said. 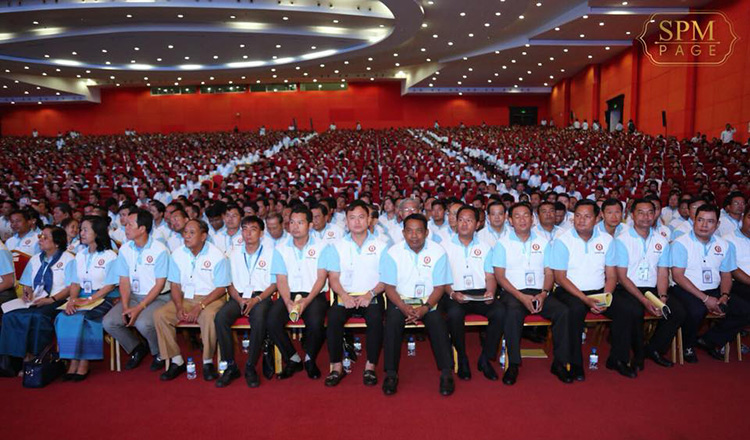 San Chey, executive director of the Affiliated Network for Social Accountability, said that Mr Hun Sen’s comments were made to help bolster the housing sector.

“The dissolution of the CNRP is not contributing entirely to the increase of the price of land and real estate,” Mr Chey said.

Sam Kuntheamy, executive director of election watchdog NICFIC, agreed that the price of real estate and land has gone up, especially in tourist areas and special economic zones.

“Businesspeople see economic growth and political stability, even though the EU and the US cut funding to the country,” Mr Kutheamy said.

Sok Eysan, spokesman for ruling CPP, said that Cambodia was on the right track.

“We see that investors are not reluctant to invest in Cambodia and they continue to come more and more,” Mr Eysan said.

The World Bank has predicted that Cambodia’s GDP will grow at 6.9 percent this year and next, slowing slightly to 6.7 percent in 2019.

Inguna Dobraja, World Bank country manager for Cambodia, said recently that GDP growth is expected to remain strong with higher public spending and the expansion of agriculture and tourism offsetting moderation in construction and the garment sector.

“It is encouraging to see that Cambodia’s economic growth will continue to be strong in the next few years,” she said.

Cambodia a key partner for China