Home - Remains of the RAT ROAD

Remains of the RAT ROAD

At one time, farmers in Kandal province’s Chrey Thom could rely on field rats to supplement their income. Now, as Rama Ariadi finds out, only the remnants of this trade remain.

Different cultures under differing adverse situations have adapted in their own unique ways to supplement their diet with much-needed proteins. Some adopt a plant-based diet, while hunter-gatherers often opt for whatever bushmeat they can gather.

In rural Cambodia, where subsistence farming still sustains the life of many, what passes as a valuable source of protein and income are field rats. It was certainly true for the village of Chrey Thom in Kandal province – which was known as one of the epicentre of the trade of rat meats to neighbouring Vietnam. Stories of a vibrant market with an unusual offering abounded. But things have changed. A mere decade after, what’s left in Chrey Thom are just remnants of the once vibrant trade.

“The market moved to Vietnam about five to six years ago,” said a shop owner whose store stood where the rat market was. “No one comes here anymore since the bridge was inaugurated. The majority who come here are tourists from the casino, looking to get on a boat tour along the river.”

Despite the development, the search for whatever remains of this trade continues – albeit at a different location – at the Chrey Thom border checkpoint. And sure enough, it took a while before the first rat trader appeared on the horizon. With two large wire cages hastily balanced on motorbike that has seen better days, Sou Tin trundles along before stopping at the border checkpoint. The makeshift transport contraption is fitted with two baskets beneath each cage – to dispose rats that died during transport as well as the excretions of the thousands of rats in the cages above.

The rats have been sorted out by Tin – the bigger, plumper ones are placed on the top of the load, to be traded for cash just across the border. The smaller rats are placed in the middle, and as these are less likely to be purchased by Vietnamese middlemen – plenty of these tiny field rats in the middle cage end up becoming a crunchy treat, to be consumed by the trader or the hunters themselves. “These days, a kilogram of live rats fetches about 4,500 riel,” said Tin. “Ten years ago, it was around 3,800 riel per kilogram.”

Under the rule of supply and demand, the increasing price can only mean one thing – market demand is higher than the available supply. But which constant is changing? Are demands on the rise, or are supplies falling? According to Tin, rat catches are on the decline as Cambodian farmers begin to embrace modern farming methods – which includes the extensive use of pesticides and modern pest control techniques. As a result, the border checkpoint is no longer jammed with traders waiting to cross the border, the way the river crossing in the old marketplace once was ten years ago.

“Back then, we can make up to three to four crossings a day, especially after the crops have been harvested,” lamented Tin. “These days, we only make one return trip. I only have about 170 kilograms of rats with me right now.”

Tin then sets off across the border. “The later I leave, the less money I make”, he said.

Competition must be fierce at the market, as the trader hurries off without saying another word. As demand must be healthy, surely Tin could not be the only person making the jaunt across. But as time goes by, no other trader crossed the checkpoint, which begs the question – is this practice even still alive?

A few kilomet from the border checkpoint, brothers Hort Vuth and Hort Vy are having a little housewarming party. Vy had just recently finished the construction of his home, which he partially financed by the profits he made as a rat trader. Vuth lives with his family not far from his field, where he grows rice while supplementing his income by catching the rats that prey on his crops. Vy, meanwhile, acts as his trader – hauling Vuth’s catch over the border to be sold to restaurants and other traders that supplies other regions as far as China.

“It wasn’t as easy as it used to be,” said Vy. “Before pesticides, we could sell up to 500 kilograms of live rats in one go – and we would have enough to make multiple trips.”

Every evening, around 6:30pm, Vuth would lay out the traps in his field. “The rats come out when people begin to return to their homes,” he explained of his particular choice of time to lay out the traps. “When the traps are laid out at the right moment, then we could expect to end up with some rats when we collect the traps in the morning.”

The rats, collected dutifully each day by Vuth and his extended family, are then sorted out by size. “Buyers generally prefer bigger rats – so the smaller ones that remain unsold are brought back to the village to be consumed,” continued Vuth as he took out a cage filled with some twenty live rats, before proceeding to extract one from the cage.

“This is how you tell if the rat is good for human consumption – look at their fur,” he continued as he took out and flipped a rat upside down. “The belly should be covered in white fur, and unlike their urban cousins – their fur has a slightly brown-yellowish tinge to it.”

The rats may be small in size, continued Vuth, but that does not necessarily mean the meat isn’t edible. “I think the smaller rats are sweeter – as their light weight allows them to climb the delicate paddy stems without breaking them,” he said. “They get the first pick of the season, so to speak.”

As with any housewarming party, food is not in short supply – but as cows are simply beyond their modest means, the protein of choice is deep-fried, crunchy rat meat. The preparation is quite simple –the fur is burnt off before the rat is skinned and cleaned, before the meat is rubbed with a mixture of salt, pepper, and chicken stock cubes. Let it rest before deep-frying, and the result is a crunchy, salty treat, that looks (and, tastes) eerily similar to deep-fried chicken – save for the tail.

“The belly is really good – that is the sweetest part of the meat,” said Vuth, in adherence to the widely-held belief that surprisingly holds true for such an unlikely animal. And true enough – the saltiness of the rub, combined with the sweetness of the belly of the rat, makes it a rather nice, albeit slightly chewy snack that goes down well with an ice-cold beer.

As the fry-up continues and the drinks continue to flow, so does the number of guests at Vy’s lawn – but apart from one child, the rest of the guest opted to forgo snacking on the rats. It seems, as their family’s fortunes are on the rise, protein preferences have also changed.

“My cousins had never had rat meat – in fact, he had only tasted it last night,” said Vuth as he takes the platter of fried rodents to the rest of the guests, to the horror of some. “I guess, why catch and eat rats when you can farm and eat chicken instead.” 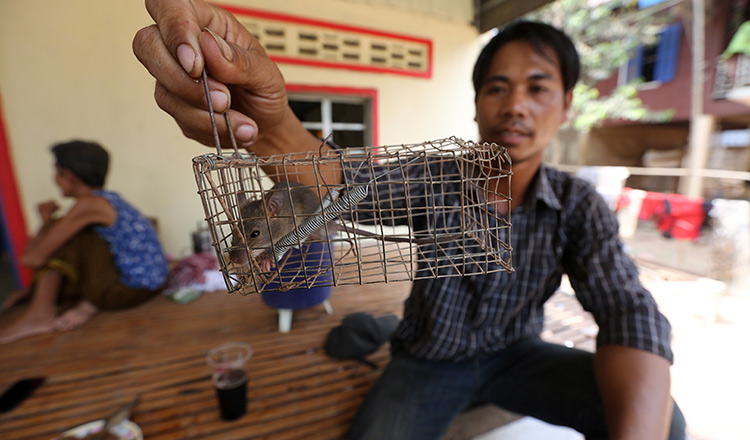 The demand for rat meat is still well and alive, but within Cambodia, the practice itself is quickly falling out of fashion, especially among the younger generation who never had to catch and consume rats as their primary source of protein and income.

Preferences aside, the practice is also under threat of extinction as Cambodians begin to use modern pest control methods – which has benefitted their output, at the cost of decimating the field rat population in Cambodia’s fertile basins.

For now, the practice is completely dependent on the existence of foreign markets, such as Vietnam and China, where the demand for rat meat continues to grow.

However, as times go and tastes converge, one should be excused for wondering – will the demand be enough to keep the practice from dying out in the future, or will Cambodians eventually forgo the rodent trade altogether for other, more readily available source of protein – thus pushing the trade over the brink of extinction?