The Interior Ministry has warned of taking legal action against former opposition leader Sam Rainsy and his colleagues who intend to sabotage the upcoming national election by calling for a boycott.

Khieu Sopheak, spokesman for the Interior Ministry, said that the appeal by Mr Rainsy, who lives in exile, had no influence on Cambodian people who are now enjoying prevailing peace and development.

“But if this group of people instigate and cause social disorder, the armed forces will take immediate action against them,” Gen Sopheak said. “We have already prepared to maintain social order and stability, and are fully capable of taking action against them.”

The reaction came after Mr Rainsy has repeatedly urged voters to abstain from the polls if the dissolved CNRP was not reinstated prior to the election.

Mr Rainsy also called on the Japanese government to have democracy restored in Cambodia, and urged the international community not to recognise the election’s results without the CNRP’s participation.

Following the dissolution of the CNRP, Mr Rainsy formed the Cambodia National Rescue Movement, which has been branded a “terrorist group” by Prime Minister Hun Sen.

Phnom Penh Municipal Court has summoned Mr Rainsy and five former lawmakers to appear at court for questioning next month over the founding of the CNRM. 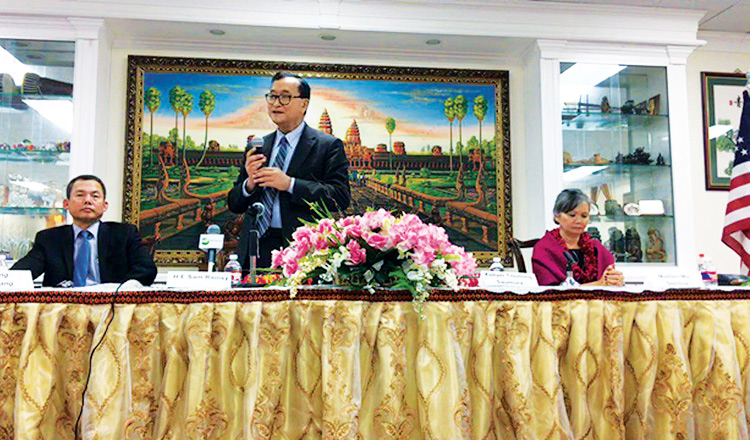 The summons came after the Interior Ministry filed a lawsuit in February against Mr Rainsy and 28 former CNRP officials accused of forming an illegal movement overseas in an effort to overthrow the government.

In January, Mr Rainsy established the CNRM in response to the Supreme Court’s dissolution of the opposition party, with the aim of helping the CNRP be revived to contest the national election in July.

Mr Rainsy urged people to protest against the government, called on the armed forces to not shoot protesters and appealed to the international community to cut aid.

Ou Chanrath, a former CNRP lawmaker, said he did not support using violence or obstructing the electoral process, but wondered if the election on July 29 would be free and fair.

“I think it is a politician’s right to call on people to boycott the election, but if violence or sabotage is expected, it is the government’s obligation to take preventative measures,” Mr Chanrath said.

The National Election Committee last week warned that anyone calling for a boycott of the upcoming national election would be punished.

The Election Law states that anyone caught preventing eligible citizens from voting may be fined between $1,250 and $5,000.