The Preah Sihanouk provincial authority is now distributing land titles to nearly 300 families in Koh Rong and Koh Rong Sanloem communes after the government decided to reallocate more than 520 hectares of state land to people living there.

On April 4, the government issued a sub-decree that provided 528.37 hectares of land in the two communes to 298 families living in the area, while also allocating some plots of land for schools, administration offices, commune halls, village headquarters, military units and pagodas.

Cheng Srong, director of the provincial department of land management, said yesterday that over the past three days, the provincial authority issued more than 530 of 637 land titles, which were being distributed to the 298 families.

He added that authorities would continue to distribute land titles this week to the remaining families that live permanently in the area.

“We would like to appeal to the people who are receiving land titles to take care and use as interest for the present and the future as the head of the government has tried to cut state land to distribute to the people,” Mr Srong said. “So, do not sell after receiving your land title and then go to grab forest land. It’s not a good thing.”

Preah Sihanouk Governor Yun Min, who gave some residents their land titles on Wednesday, said the 637 land titles were being distributed to the residents of four villages.

Mr Min asked the residents to safeguard their land titles and take care of the land and the environment.

Kan Ban, a resident of Koh Rong commune’s Prek Svay village who already received his land title, expressed appreciation and gratitude to Prime Minister Hun Sen and related authorities for providing legal ownership to him and other citizens. 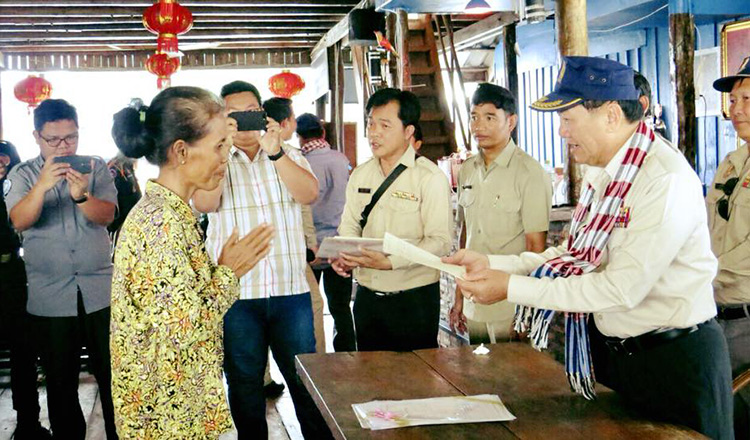 “I will protect this land title and won’t sell my land. I will keep it for my children in the future,” he said. Seng Hour Leang, the chief of Koh Rong commune, said recently that the decision by the government to reallocate the land to the people was carried out step by step.

He noted that more than 200 other families were still waiting for provision of ownership in Koh Rong commune.