Following their dream to create a well-known Cambodian band, the startup “YPLUS”, jointly formed by young students, has strived for years to continue their journey in the music stage. No instructors, just genuine pieces of advice from seniors and their master teacher – YouTube.

YPLUS Band is a group of six people – naturally gifted young musicians – whose passion for music go beyond their age. The band has a drummer, bassist, keyboard player, lead guitarist, guitarist and a singer. The musical startup was established in mid-2015 while its members were studying at Preah Sisowath High School. The band has been invited to perform at charity concerts, high school events, as wells as at Bun Phum 2017, AIS Concert and ACE Event. 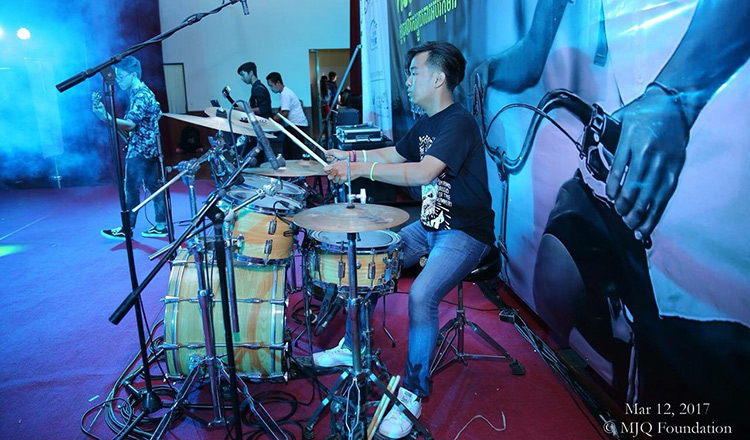 Kang Bunthavin or Vinchy, 18, who just entered year one majoring in Information Technology (IT) at Western University stands as the band leader. He explained that the YPLUS Band aims to uphold original Cambodian songs and draw more people into the Cambodian music. He shared that many people remember the songs, but not the composers or bands behind the musical masterpieces.

Joining Preah Sisovath Red-Cross Band in 2014, Mr Vinchy was trained by a senior in playing drums. After getting along with other drummers and discovering his talent in music, Mr Vinchy decided to create his own band – which took two years to establish – and started performing outside of the school. Mr Vinchy said that not having any professional help for training has become a great challenge for the band he has formed. But the group’s passion and determination made them surpass the challenges. The members strived individually. They rented a studio for meetings and rehearsals. Currently, YPLUS Band has two original songs that have yet to be released due to financial constraints. But the band strongly believes that they will soon let others hear their songs, and be well-known. The members have high hopes that a production or media outfit will see their talents and help them uplift the Cambodian music.

Ngov Phirunreaksmey, 18, a Grade 12 fresh graduate whose skill is in playing the electric guitar, has known his knack for music ever since he was a child. “I was so thrilled to see any band in television when I was a child. I remember that I used to imitate their gesture of playing guitar, and all time my mum’s sweep was my guitar,” he said. 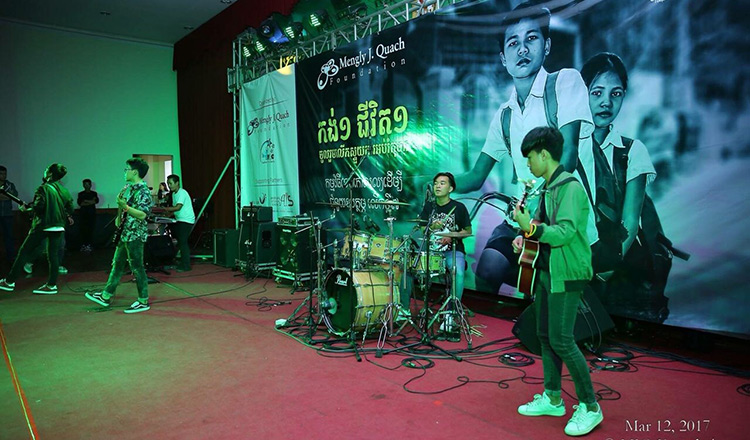 Apart from getting trained by his senior at school and getting advice from his peer’s father, he gained in-depth knowledge of how to play guitar and its tactics through YouTube.

With his innate fondness to music, Kin Channarith, 19, serves as the keyboard player of the band. Mr Channarith is currently studying IT at the Royal University of Phnom Penh. He joined YPLUS last year. Mr Channarith shared that he started to play keyboards when his father bought one. He also used to be part of the Red-Cross Band in 2014, which has become his stepping stone to improve his musical talent. “Within only four months, I could play around four to five songs. Until now, I could play almost kinds of songs especially the old ones I frequently play. It usually takes me about 20 minutes to learn new songs,” he mentioned.

Mr Channarith and the rest of the members of the YPLUS Band hope that more Cambodians will support original songs. Aside from the time and effort the band is pouring into creating good music, YPLUS Band is proud to share that original Cambodian songs are as good as, if not better than, the songs from foreign lands.

The young mind behind: BookMeBus

‘Off. Your Digital Detox for a Better Life’