A security guard with the US embassy in Phnom Penh claimed yesterday that guards are being forced to work overtime in the wake of 32 people being fired after accusations that they were sharing pornographic material in a non-official chat group.

Four sources said last week that pornographic videos and photographs, including some featuring people under the age of 18, were shared in a Facebook Messenger chat group.

Some of the images were seen by the wife of an embassy worker who reported the incident to an official at the embassy.

“They had their identification cards taken and some of their phones checked,” a former US embassy staff member said on condition of anonymity.

He said the 32 embassy workers included Cambodians and Cambodian-Americans. Many were guards and some were clerical staff. There were no diplomats among them, they said.

A guard at the embassy, who spoke on condition of anonymity, said via email yesterday that remaining guards are now being forced to work overtime. 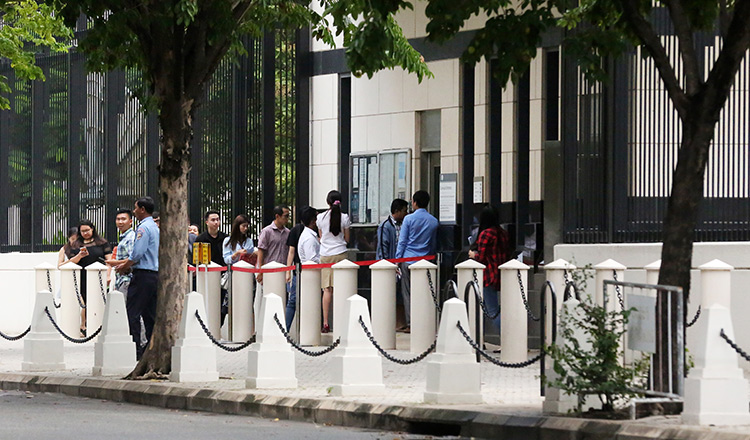 “Recently, all security guards forces are scheduled to work full weeks,” the guard said. “They have been forced to work without any day off.”

“All security guard forces are required to work only 48 hours a week. So they have to have one day off every week. That’s what was written clearly on the job announcement as well as the contract they signed,” the guard added.

The guard added that no one dared to complain of the labour rights abuses because they feared also losing their jobs.

“There are two reasons that they are afraid to complain about this issue,” the guard said. “First, they are afraid of being fired from the embassy. Second, they hope to get immigration visas to live in the United States of America after they have worked at the embassy for 20 years.”

The US Embassy in Phnom Penh sent their reaction late yesterday.

David Josar, spokesman US embassy, said he could not elaborate on the case. “We do not comment on an internal personnel matter. We only note that the Embassy has clear and firm policies regarding appropriate employee conduct as well as an appeal process for employees who believe they were unfairly terminated,” he wrote via email.