As Khmer New Year approaches, prophecies issued by the government say that this year will see more rain than usual, high rice yields and rising wages, but also possible destruction in the capital and an outbreak of disease.

Every year, a group of theological researchers with the Ministry of Cults and Religion issue New Year prophecies in the New Year Almanac.

Im Borin, editor of the New Year Almanac, says that this year will bring a range of improvements for Cambodian society, but also possible devastation.

“The prophecy of the year is that there will be the 600 instances of rainfall, which will cause good rainfall throughout the year,” he says in the almanac, noting that rice yields will increase.

Mr Borin also says that the livelihoods of Cambodians will improve throughout the year as wages rise and the economy continues to grow.

But he also says that there will be destruction in the capital and the spread of disease.

His predictions come as Prime Minister Hun Sen revealed this week that the government had prevented a terrorist plot by the Khmer National Liberation Front, an alleged terrorist organisation plotting to set off explosives in Phnom Penh to disrupt New Year festivities.

Mr Hun Sen said that Sam Serey, president of the KNLF who now lives in Denmark, ordered his members to cause an explosion at Wat Phnom in the capital two days before Khmer New Year.

Mr Hun Sen added that Mr Serey ordered his members in Cambodia to set off explosives in Phnom Penh and Siem Reap province. 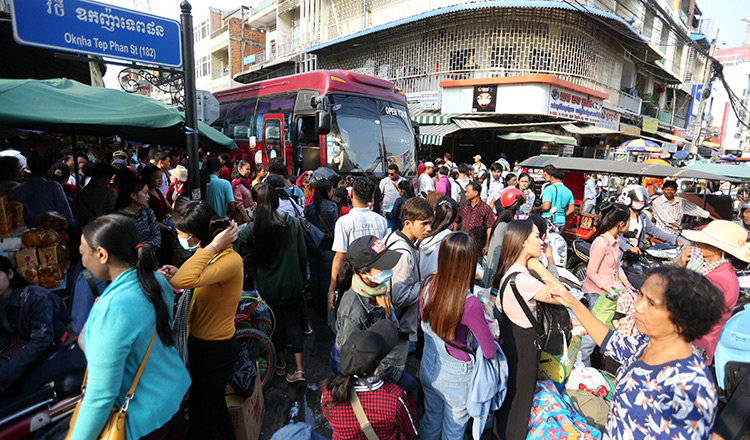 The premier noted that after the plot was discovered, he ordered all armed forces to stay vigilant and prevent it from occurring.

Political analyst Hang Vitou says that the security situation will remain the same before and after Khmer New Year, depending on the political situation.

Mr Vitou says that the security situation will only be secured once the political situation improves, suggesting that Japan be a mediator between the ruling CPP and dissolved CNRP.

“I see that Japan can be a central party that mediates negotiations between the two sides,” he says. “The CPP must be clear: our country is a democratic country, and an election without the participation of the opposition party will result in international recognition not being given to the election results, which could then lead to sanctions from the United States or EU.”

Mr Vitou adds that the former opposition must change its tactics and take a more diplomatic approach to securing negotiations.

“Sam Rainsy should use gentle tactics with Prime Minister Hun Sen,” he says. “But if the two parties remain stubborn, the political situation will become more and more disengaged.” 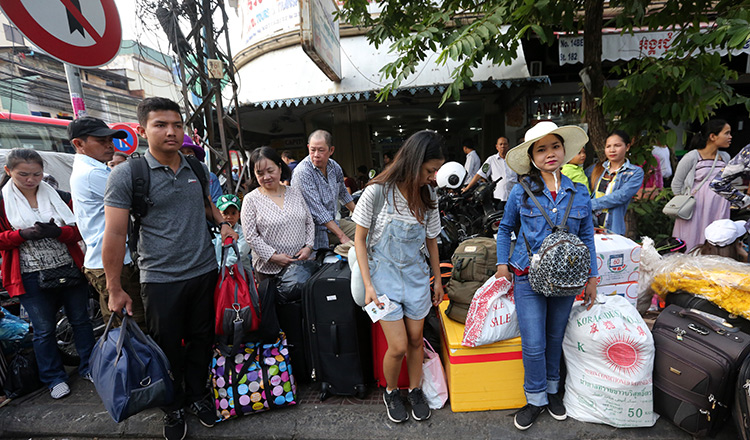 Heak Channa, a 25-year-old garment worker in Kampong Speu province, says that she believes in the prophecy that living conditions will improve for people, citing the hike in the minimum wage this year for garment workers.

“But I do not want to receive it only for myself,” she says. “I want the government to increase attention on other workers, too.”

“Respect for workers needs to be improved and salaries need to rise in line with the price of goods,” she adds. “An increase in more job opportunities within the country would also be good.”

Speaking to thousands of garment workers in Phnom Penh’s Por Senchey district, Mr Hun Sen recently said that in 1997, Cambodia had only 64 factories with more than 80,000 workers who earned only $40 per month.

He added that now there were more than 1,100 garment and footwear factories where workers earned $153 per month in 2017 and $170 starting this year, which could add up to more than $200 including other benefits.

A draft minimum wage law for all sectors is also currently being established. The draft law, which has 33 articles across six chapters, will benefit workers and the nation as a whole because it intended to promote a decent living, create job opportunities, increase worker productivity, and push for increased investment opportunities.

Mr Hun Sen said in a letter this week marking the upcoming Khmer New Year that all citizens will reap the benefits of continued economic growth.

“In line with the progress on industry and craft sectors, the government has paid attention to the employees who are employed in the private sector by deciding to raise minimum wages for workers in textile, garment and footwear factories to $170 in 2018, excluding other benefits,” he said.

Mr Hun Sen noted that living standards have improved, demonstrated through social indicators, especially GDP and the poverty rate, which has dropped sharply from 53 percent in 2004 to 13.5 percent in 2014 and continued to drop further in 2017.

“For the year of the dog, in Buddhist year 2562, the government is committed to maintain peace, political stability, security, public order, and to protect the constitution, the monarchy and all achievements that the government and the people have achieved,” he added. “Cambodia has carefully implemented a macroeconomic policy, stabilized the economy, and promoted diversification of the economy, competitiveness, and the production and consumption of domestic goods.”