The US embassy issued a security alert on Wednesday urging all US citizens in the country to exercise caution after Prime Minister Hun Sen said that a terrorist organisation had been planning an attack in Phnom Penh before Khmer New Year.

The US embassy posted a statement on its Facebook page on Wednesday, warning of possible bombings during Khmer New Year in Phnom Penh and Siem Reap province.

“US government personnel have been advised to exercise caution around Wat Phnom and to be aware of their surroundings in general,” the statement read.

The embassy also advised its citizens to exercise caution in areas with large crowds, to leave the area immediately if they saw an unattended object, to monitor local media for updates and to be aware of their surroundings.

Mr Serey has since denied that he was involved in the plot and said that it was Mr Hun Sen’s ploy to attack him. 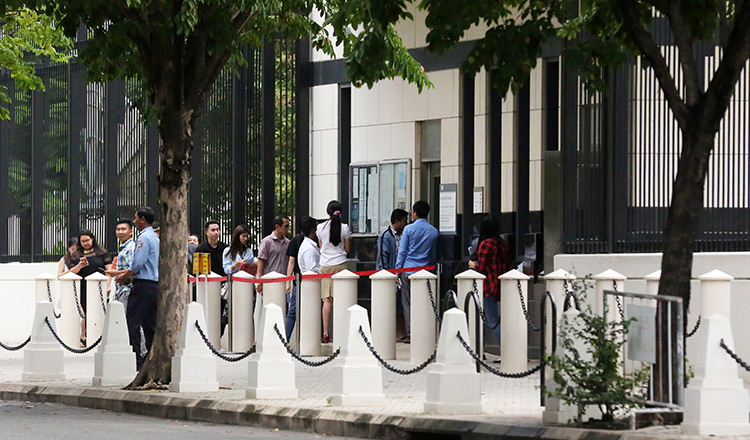 Mr Serey was sentenced in absentia to nine years in prison for allegedly trying to topple the government in 2014.

A day after Mr Hun Sen’s claim, phone conversations purported to be between members of the KNLF were leaked.

According to the audio recordings, which Fresh News obtained from authorities and published on Tuesday, a woman named Huy Thou was heard talking to a man named Sim Vuthy, a KNLF member, over a plot to plant explosives at Wat Phnom and disrupt Khmer New Year festivities.

General Khieu Sopheak, spokesman for the Interior Ministry, said that security forces and police are ready to be deployed in all provinces to provide security during Khmer New Year.

Mr Sopheak said that the police have kept the situation under control since the terror plot was discovered and prevented.

“Our police are of enough capacity to provide security for our people,” he said “We pay strong attention to security, especially preventing terrorism.”

Large crowds are expected in some tourism-attracting provinces, especially Siem Reap province where the Union of Youth Federations of Cambodia has organised the sixth event of the Angkor Sangkranta from Saturday until Monday.