Home - Yike performance demonstrates of the value of loyalty

Yike performance demonstrates of the value of loyalty

A crowd of people stood and sat on handmade mats waiting for the show. Before them was a stage set up with colourful flashing lights designed for a Lakhoan Yike performance, “Sobpa Sith”. The performance was one of the striking shows staged for the Village Festival, or Bon Phum, at Kok Ampel pagoda last week.

After a few traditional Khmer songs were played, it was time for a Yike performance by the Yike Amatak troupe, who received loud applause from the audience even before the story began. The story was similar to a classical tale; a king and his advisers, played enthusiastically by the singers, went into the forest to enjoy nature. The king’s friend was about to kill a deer with a bow and arrow, but he was interrupted by the king, who said animals also want to live happily, as people do.

Later a deer was dying in front of them. To rescue it, the king was urged by his friend to use magic and transport his soul into the deer in order to help it. Acting out of greed, the king’s friend takes his body and acts as the husband of his queen, Botum Kesor.

The queen senses something odd in the king’s behaviour, but fortunately she meets the real king, whose soul has taken the form of a bird. As Botum Kesor is quite intelligent, she finds a way to help her husband. Through karma, the king’s friend becomes a deer, as the king used to be. 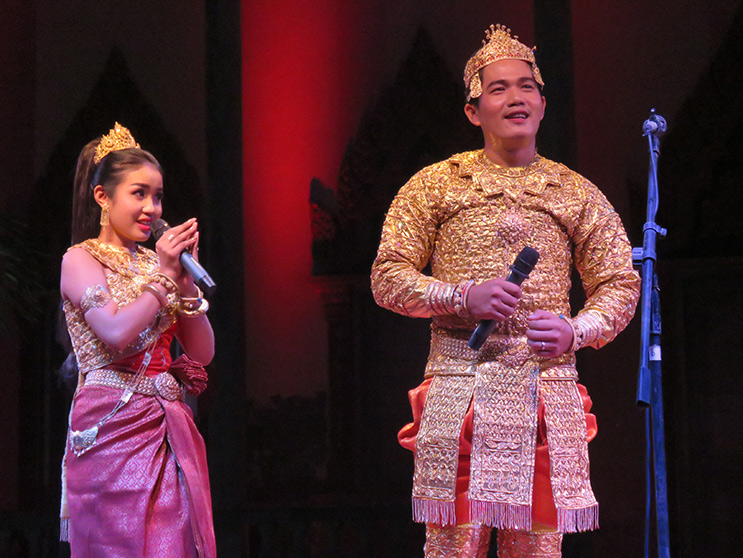 Uy Latavan, an instructor with the Yike Amatak troupe, explained that she chose this story because she had noticed that some people now are really greedy and are willing to do anything to satisfy their desires, even betraying a trusted friend whom they have known since childhood, as what happened to the king in the performance.

“The main idea is that I want people to understand that wherever we have love, peace will be with us. So I hope people get the message of the story and start to value loyalty,” she explained.