Takeo province police yesterday continued questioning the driver of a truck who was involved in a traffic accident on Tuesday with a National Assembly envoy lead by the provincial police in Kirivong district that left the deputy provincial police chief seriously injured.

In the report, he identified the victims as Pok Polrith, 55, deputy provincial police chief; Phoum Sokea, 31; Srat Ol, 44, and Chrun Phally, 29, all from the provincial police’s traffic accident bureau.

Ros Saroeun, Kirivong district deputy police chief in charge of traffic, said that when police were escorting a National Assembly envoy visiting the district, a truck driven by 23-year-old Sien Rithy hit the lead escort vehicle at an intersection.​“The suspect is still being questioned.

National Assembly members were being escorted by the provincial police to a meeting at the border of regiment 301,” he said. “The escorting car was going straight through an intersection when it was hit by the truck.”

“The cause of the traffic accident was because the soil truck was driving very fast and carelessly,” he added. “The truck driver didn’t hear the sirens because he was listening to music using earphones.” 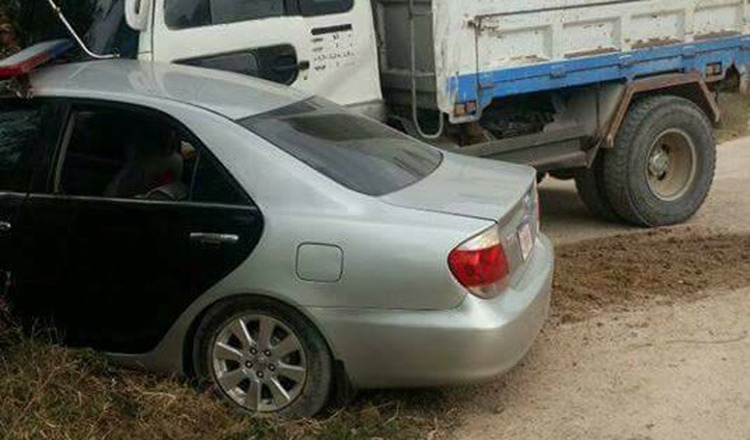 Mr Saroeun said the envoy was travelling from Takeo province toward Kirivong district when the accident occurred.

There were four provincial officers in the lead escort vehicle, including the provincial deputy police chief who was sitting in the passenger seat. He was seriously injured and he was sent to a hospital in Vietnam.

“The lead escort was travelling west when it crossed an intersection. The car was actually hit in Choan Chum commune but the truck hit the car so hard it ended up in Kiri Chong Koh commune,” he said.

A total of 1,780 people died and 5,539 people were injured in traffic accidents nationwide in 2017. Among the deaths, 80 percent involved motorbikes and most of the victims were not wearing a helmet.

According to a report by the National Police’s public order department, there was an increase in deaths and a decrease in injuries compared with 2016, when there were 1,717 deaths and 6,607 injuries.