Phone conversations purported to be between two members of the Khmer National Liberation Front were leaked a day after Prime Minister Hun Sen claimed that the terrorist organisation had been planning an attack in Phnom Penh before Khmer New Year.

According to the audio recordings, which Fresh News obtained from authorities and published online on Tuesday, a woman named Huy Thou was heard talking to a man named Sim Vuthy, a KNLF member, over a plot to plant explosives at Wat Phnom and disrupt Khmer New Year festivities.

Authorities confirmed that the conversations were recorded on Saturday and Monday and were related to the plot of setting off explosives in Phnom Penh as ordered by Sam Serey, the KNLF president who lives in Denmark.

Mr Hun Sen on Monday said that Mr Serey ordered his members in Cambodia to set off an explosion at Wat Phnom on Thursday, two days before Khmer New Year.

Mr Hun Sen added that Mr Serey ordered his members in Cambodia to set off explosives in Phnom Penh and Siem Reap province.

The premier said the plot was intended to disrupt New Year festivities and he ordered authorities to prevent it.

In the first audio recording, Ms Thou referred to Mr Serey using the name Yean Yeap in a conversation with Mr Vuthy.

She said Mr Serey told her to welcome two KNLF members from Thailand at her home and let them stay there on Thursday.

“Uncle, now he [Mr Serey] played a trick on me. He wanted me to carry it out by myself and said he would guarantee my safety,” Ms Thou was heard telling Mr Vuthy.

In a second recording made on Monday, Ms Thou said that she was ordered to bring bombs to Cambodia from Thailand’s Rong Kluea market, which borders Banteay Meanchey province.

Ms Thou said Mr Serey asked her to meet KNLF members at Rong Kluea market to get the explosives, but she refused. 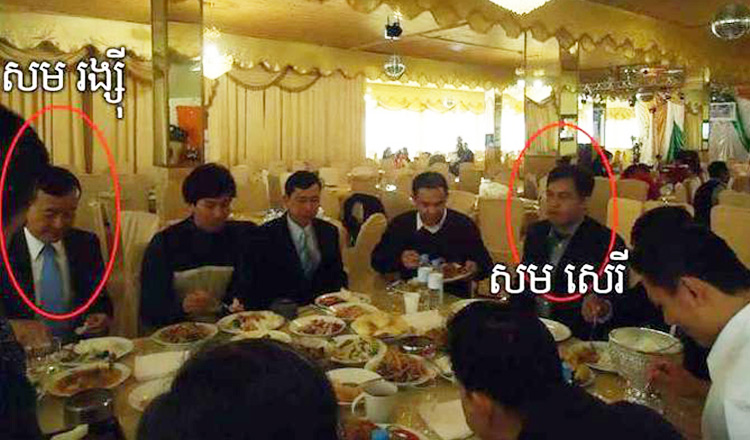 “He told me to take the explosives and plant them at Wat Phnom,” Ms Thou said, adding that Mr Serey usually cheated her and other KNLF members. Mr Vuthy discouraged her from planting the explosives.

Mr Hun Sen on Tuesday said that after the plot was unveiled, he ordered all armed forces to stay vigilant and prevent it from occurring.

Mr Serey said yesterday that the audio recordings did not contain his voice and were just conversations between two people.

“This is a plot by Hun Sen to attack me. This recording was made up by police and their spies in order to make me look guilty. Where is my voice?” Mr Serey asked. “I have never ordered anyone to commit violence.”

Mr Serey confirmed that there are many former CNRP members living in the country and Thailand who support the KNLF and its government-in-exile.

He added that Ms Thou was a former member of the dissolved CNRP and also a supporter of the KNLF.

When asked why Ms Thou accused him of ordering the attack, Mr Serey said: “The police could have bribed her to do so.” Mr Serey was granted asylum in Denmark after living as a refugee in Thailand for a number of years, and established a government-in-exile in Denmark.

He was sentenced in absentia to nine years in prison for allegedly trying to topple the government in 2014.

A total of 18 KNLF members are currently behind bars in Phnom Penh.

Mr Serey is also a member of the Khmer National Unity Front, also known as the Tiger Liberation Movement or Tiger Head Movement, whose objective is to root out Vietnamese influence from within the Cambodian government.

Khieu Sopheak, spokesman for the Interior Ministry, declined to comment over the leaked audio recordings, but provided a document detailing Mr Serey’s illegal activities with the KNUF.

The KNUF gained notoriety for planting explosives in front of the Council of Ministers and the former TV3 station, as well as carrying out armed kidnappings in 2007.

The document also accused former opposition leader Sam Rainsy of conspiring with Mr Serey in an attempt to send more than 300 youth forces trained in Norway to come to Cambodia and cause chaos during the upcoming election.