Ministry officials on Monday discussed the issue of road expansion by a private gold mining company in the Phnom Prich Wildlife Sanctuary in Mondulkiri province.

The Environment Ministry, along with the Ministry of Mines and Energy and several NGOs, discussed the request of Renaissance Minerals to construct an entrance road into the designated mining site.

Heng Narith, director general of environmental protection, said the government concurred with Renaissance Minerals’ environmental impact assessment, but there was still the concern about the construction of a road project into the mining site that could lead to forestry crime being committed by villagers living around the area.

“The company has already prepared the environmental impact assessment report and they want to prepare another report on the assessment of the arrangement of the entrance road,” he said.

“And the clear designation of the overall stretch of land for mining to avoid unpermitted expansion,” he added.

“They don’t get the license to commence construction because they haven’t gotten the approval. That is why we are studying and seeking common approval. We haven’t unilaterally approved [the request] but we will get input from civil organisations working on environmental protection.”

According to an Environment Ministry report, the company received the approval to explore for gold on a total of 1,150 hectares designated for the Renaissance Minerals mining operation.

Yos Monirath, spokesman for the Ministry of Mines and Energy, said even though the issue of wildlife raised concerns, mining was inevitable because the country needs economic growth.

“World Wildlife Foundation is concerned that there are a number of wildlife species in the area, but we limited the area that can be used for mining so it is not rampant. We also assessed the environmental impact already. Mining is unavoidable for the development of our country,” he said.

“They are concerned that if there is an entrance road then deforestation will occur. We all should work hand-in-hand to prevent villagers from doing so,” Mr Monirath added. 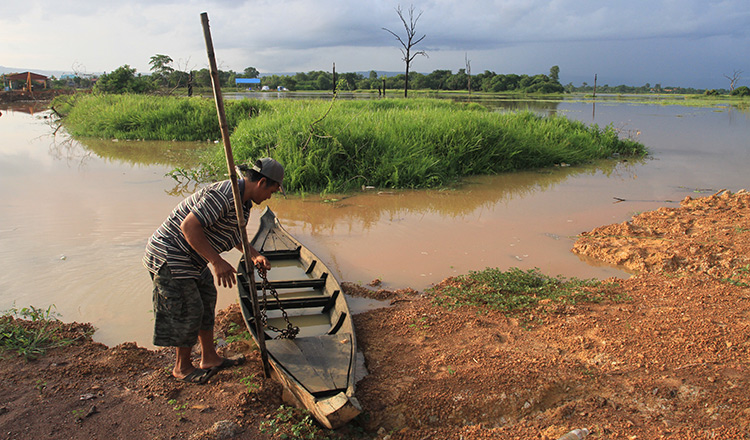 “The company has had the license to explore for years now and they are seeking a license to do [more] business. The application is still under review by the Environment Ministry to decide. We have given them 1,000 hectares for them to conduct their mining operation.”

Sok Bol, a WWF officer in Mondulkiri province, said though it may not be apparent right away, there are several factors that could affect the lives of humans and animals.

“The machines create a lot of noise which have forced a number of birds and animals to migrate from the area. It will affect humans as well because the company uses chemicals that taint the water these people use,” he said.

Mr Bol said there should be buildings enclosing the machines to keep the noise level down.

Mr Narith, however, said there was no noise disturbance because the company only used normal machinery.