The Siem Reap provincial authority has banned the sale and use of water guns in the province in the run-up to the coming Khmer New Year, which is expected to attract an influx of tourists into the city, according to the provincial police.

A provincial police officer said the crackdown would be in operation for the whole of Siem Reap province, but especially in the city center where there will be more tourists during the New Year.

According to a provincial police report, an operation on Monday saw the owners of 25 shops in four communes of Siem Reap city agreeing to sign a contract not to sell water guns and promised to disseminate the prohibition of the use of water guns.

Provincial police chief Tith Narong said the ban followed the observation that the water guns might cause traffic accidents and public disorder. 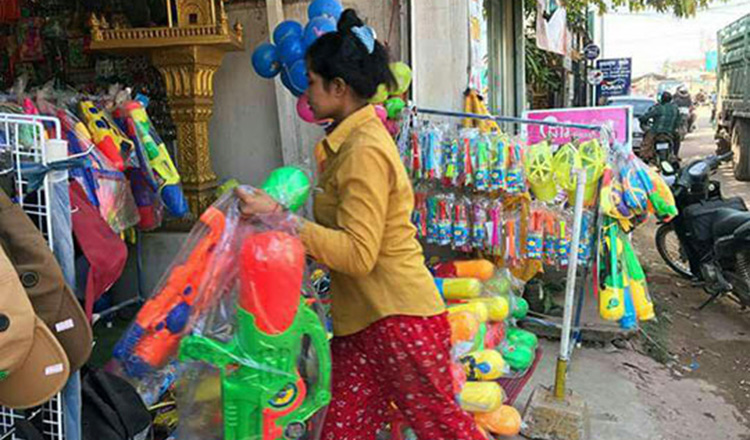 “According to the announcement of the town and provincial administration hall, the sale of such water guns is banned during the Khmer New Year as it can cause traffic accidents and cause public disorder during this time,” he said.

“They use these guns on others and the other people try to avoid it and they attack motorbikes and cars, so we won’t let them do that in public areas. If they want to play with water, they can go to designated areas where the firetruck is used near Bayon Temple,” Mr Narong added.

“It causes pubic disorder, traffic accidents and public insecurity. So we banned them from selling water guns. They only play with these guns during the New Year because many people come to visit Siem Reap, but there will be too many motorbikes and cars on the roads.”

Mr Narong also warned against throwing talcum powder on people during the holiday.

“This leads to the use of powder to rub on one another’s face. That is an opportunity for thieves to snatch earrings and necklaces, which affects security. We asked them to help us disseminate these rules and if they don’t listen, we will seize them [powder and water guns],” he said.

Provincial governor Khim Bunsong could not be reached for comment.